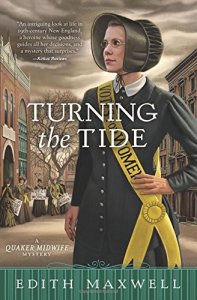 A suffragist is murdered in Rose Carroll’s Massachusetts town

Excitement runs high during presidential election week in 1888. The Woman Suffrage Association plans a demonstration and movement leader Elizabeth Cady Stanton comes to town to rally the troops, one of whom is Quaker midwife Rose Carroll. But the next morning, Rose finds the dead body of the group’s local organizer.

Rose can’t help wanting to know who committed the murder, and she quickly discovers several people who have motives. The victim had planned to leave her controlling husband, and a promotion had cost her male colleague his job. She’d also recently spurned a fellow suffragist’s affections. After Rose’s own life is threatened, identifying the killer takes on a personal sense of urgency.

My Review: I always love a good and cozy mystery series, particularly those with a strong female lead and set in the late 19th – early 20th centuries. I found this particular series to be extra intriguing because the protagonist is a Quaker. I haven’t read many books involving Quakers and I’m honestly not very knowledgeable when it comes to their practices and beliefs. It was interesting to learn more about how they live and what they believe.

Rose is a strong character, clever, yet sometimes careless in her decisions. I find her opinions intriguing and I love her calm way of thinking. I feel the author has done a good job creating a cast of interesting and likable characters.

I have never read any of Edith Maxwell’s work until now. I actually won this copy directly from the author herself and The Wicked Cozy Authors Blog. Since I hadn’t read any before and this being third in the series, I had to acquire the first and second in the series before I could read the third. (I cannot read a series out of order!)

I am happy to now include Edith Maxwell in my list of cozy authors. Many thanks to the author for this book! 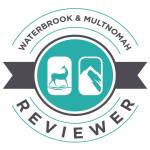 Kimberly has
read 16 books toward
her goal of
50 books.
hide